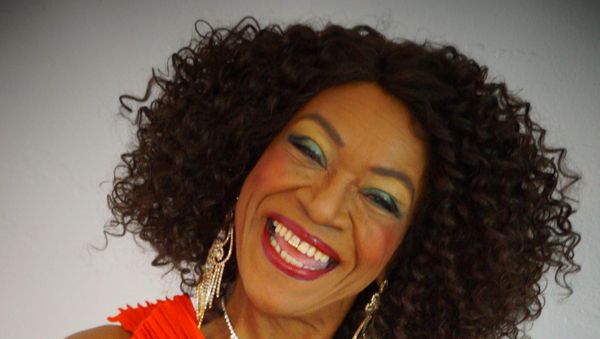 TGGBS is bringing a multi-award winning blues artist, Trudy Lynn to the World Famous Turf Club on October 10th for a very special show (4 - 8 pm). This is a THANK YOU to all our members! Don't miss Trudy Lynn! There will be a jam after her performance. THIS EVENT IS FREE!

"Between the woman’s originals and covers of Lowell Fulson, Memphis Minnie, Johnny Copeland, and others, this is working class blues for those who need it to stay alive."

- The Morton Report, review of I'll Sing The Blues For You 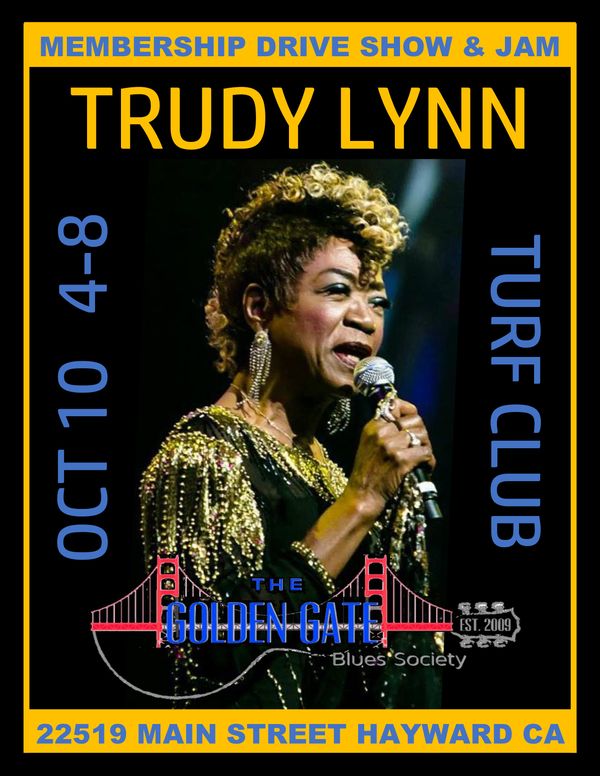 Trudy Lynn, from the Fifth Ward in Houston, Texas, is the quintessential Blues diva - smooth and saucy, sweet and sarcastic, sophisticated and suggestive. These polarities bring together a vocal powerhouse – and it’s all blues, baby.

The Allmusic journalist, Alex Henderson, noted that "Lynn isn't one to hold back emotionally; like Koko Taylor and Etta James, she screams, shouts, testifies and gets her points across in a highly convincing way".

For her outstanding contributions to blues and soul, Trudy Lynn was presented with two prestigious awards in 2019: the Living Legend Blues Award from the Houston Blues Society, and the Willie Mitchell Lifetime Artist Award from the Jus' Blues Music Foundation.

In 2014, she became an international blues sensation with her hit album “Royal Oaks Blues Café” that claimed Billboard's Blues #1 spot. Her 2016 album, “I'll Sing The Blues For You,” reached #6 on Billboard's Blues Chart.

Since joining forces with harmonica wizard Steve Krase and the Connor Ray Music label in 2014, Lynn has played curator for herself. She has written her own songs that blend nicely with the vintage songs, mostly about good times and bad men. "Each one of these songs means something to me," she says. "I truly understand something about each one of them." 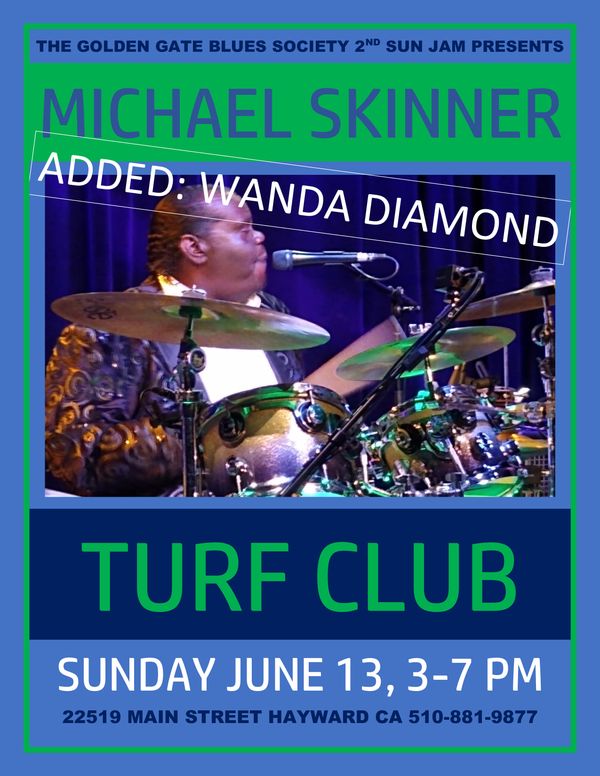 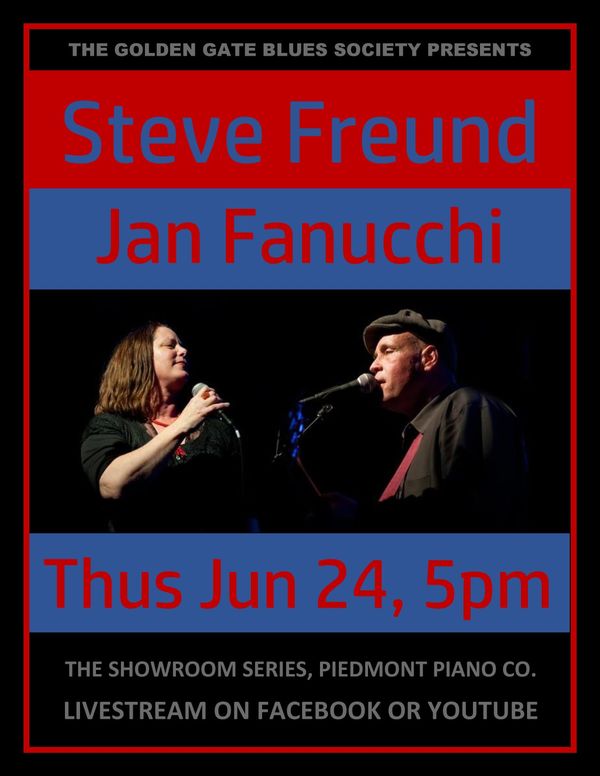 Chris Cain offers up a soulful stew of Memphis style electric blues. His powerfully deep vocals and jazz inspired, blues guitar riffs are unforgettable; uniquely his own, while reminiscent of the legendary BB King and Albert King. As a child, Chris Cain attended concerts with his dad to hear many of the great blues artists of the time. When Cain burst onto the blues scene in 1987 with his award winning debut album, he soon found himself sharing the stage and trading licks with a few of those legends, including Albert King and Albert Collins. Chris Cain has released a dozen albums, each filled with soul-stirring songs pulled from his own blues drenched heart. His brand of blues is unforgettable. 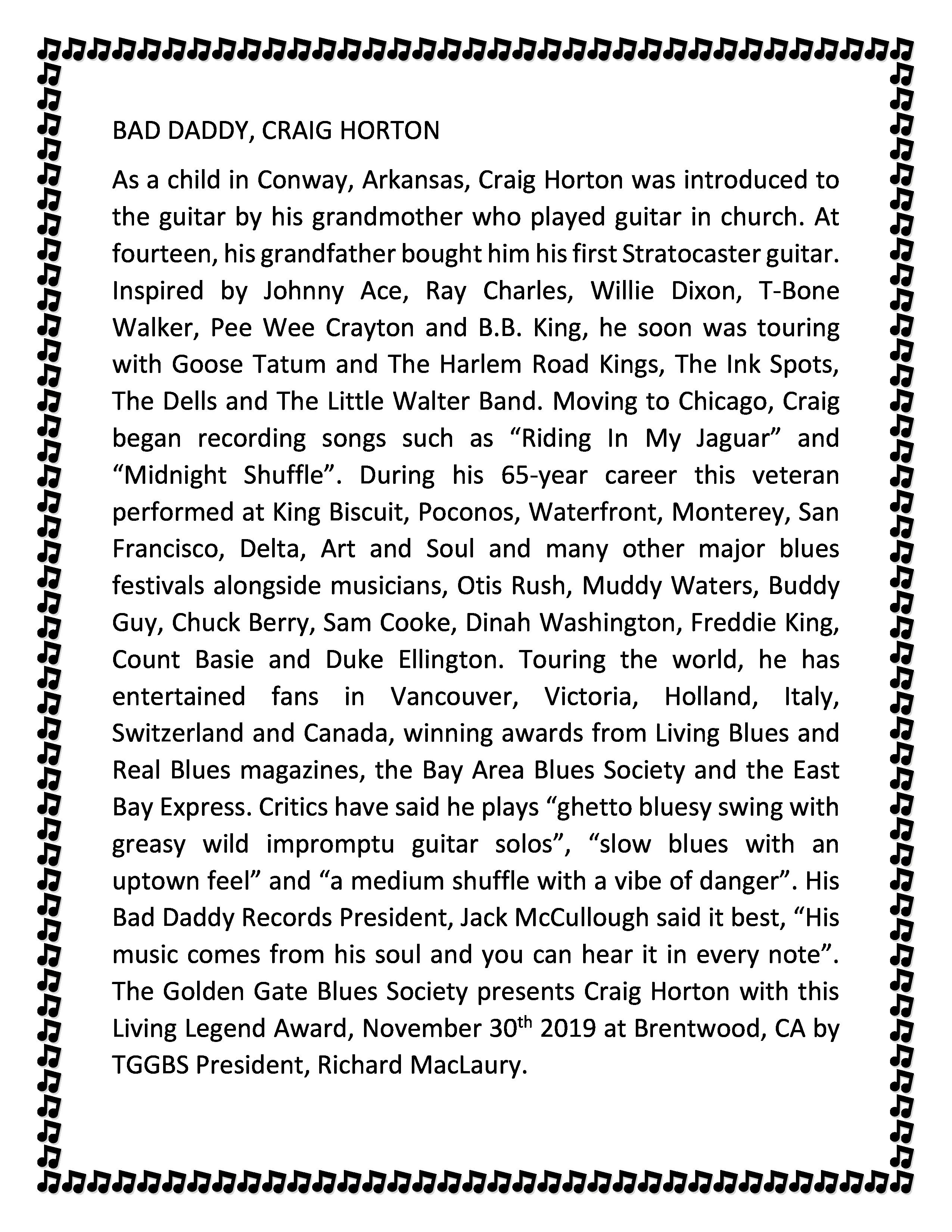 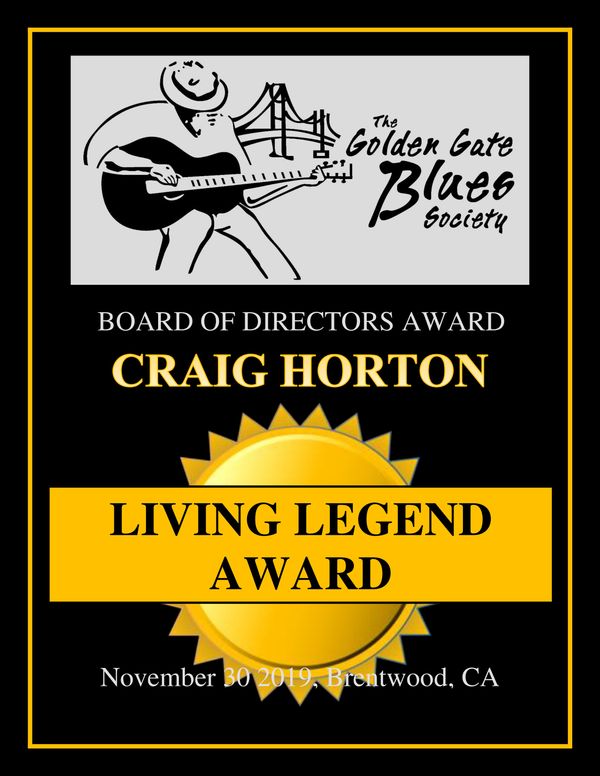 BEFORE CONTACTING US FOR EVENT SUPPORT end an email to calendar@sacblues.com to get on Rico's Blues News! This will be the new calendar for the Bay Area Blues scene once band members get used to entering their shows into the database.

TGGBS EVENT SUPPORT POLICY: TGGBS is a non-profit all-volunteer organization, with a board comprised of working professionals with very limited free time. On any given night, there are hundreds of live music acts performing in the SF Bay Area; an impossible task to keep up with. Rather than play favorites, we limit our event promotion to the following circumstances:

2) LOCAL Blues Events which offer a TGGBS Member Discount of $5 or more (ticket discounts are preferred).

3) Our own TGGBS Events, such as our International Blues Challenge (IBC) Events, Fundraisers, and TGGBS Jams.

If your event fits into Categories 1 or 2, please send an email to info@tggbs.org. If we're sending out an email newsletter before your event occurs, we may also add your event to the newsletter.

Thank you for your support!